I would like to write today about a trip up Quandary, and a few insights.   To start I will describe the trip and hopefully this will lead naturally to the insights I wish to discuss.

On an very overcast and fairly melancholy day, we started out with the goal of hiking and skiing the east ridge of Quandary.  Doug asked me to go on this trip and I was glad the weather was holding out just enough.  We met up with two others Charles and Hati, before driving into a grey world.  I met Hati on a hike out from Chicago Basin, the year before and had not seen him since.  What a small world we live in.

We started up the trail through a mystery of thick conifers.  I was leading and I surely took the most convoluted route possible.  However, despite my lack of navigational skill we made it up to the treeline.  Here we met a few other groups coming up from behind us.  After a few conversations, and some food we stared up into the misty alpine.  I had spent too much time at the gym the night before and was not in the best shape for the trip.  Doug was doing well and we made good time up to the first plateau along the ridge. 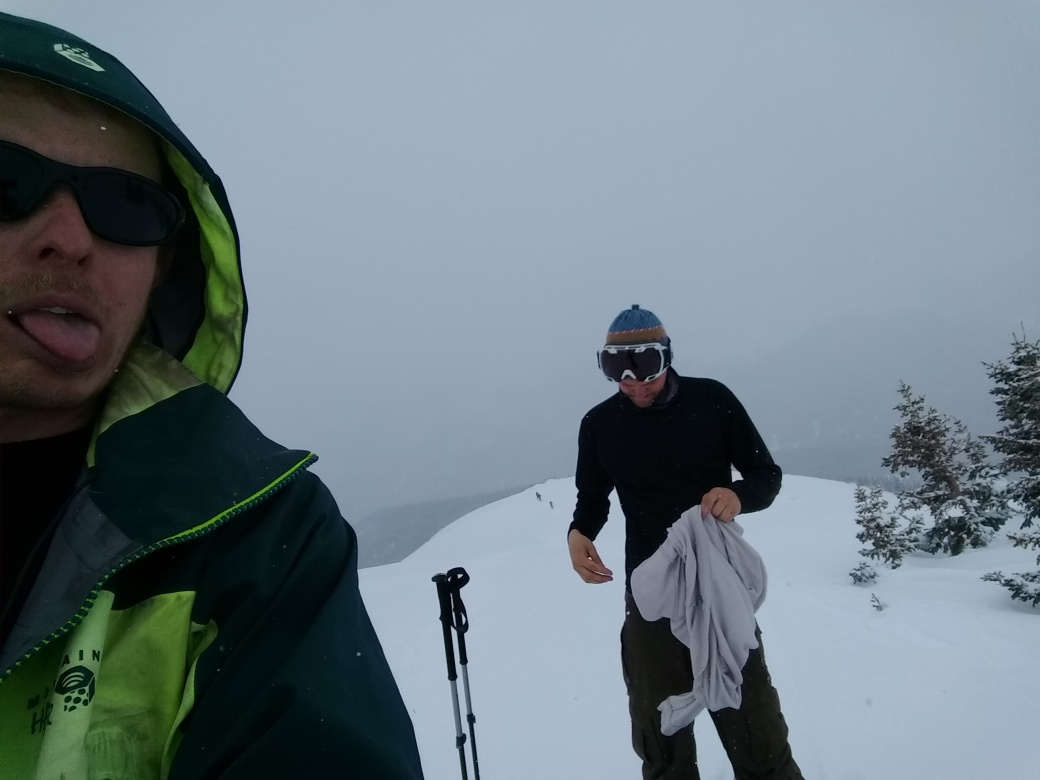 Upon arriving here the feeling was one of a Martian world, dead calm but with a heavy clouds clinging to the slopes and obscuring all sight beyond the next step.   At this point Doug was ready for a break and we spent some time defining our next course of action.  We were not yet getting vertigo and we decided to continue as long as there was at least one reference point behind us, be it rock or topography.

Climbing through a cloud gives a strangely calming feeling.  It as if you are not at altitude at all, and instead in the bottom of some great valley.  However, the thought of getting to the summit was enough to keep one foot moving in front of the other.  200 yards before the summit we were starting to feel the summit was only a myth.  All we could see was more slope and more cloud.

The summit appeared out of nowhere.  At last!   Up top we met another party starting down.  I was glad that we had made it.  It is one thing to hike a mountain with your friend in great conditions.  It is an entirely different one to summit in a hanging cloud.  Gratitude was the most prominent emotion; the mountain had let us pass once again! 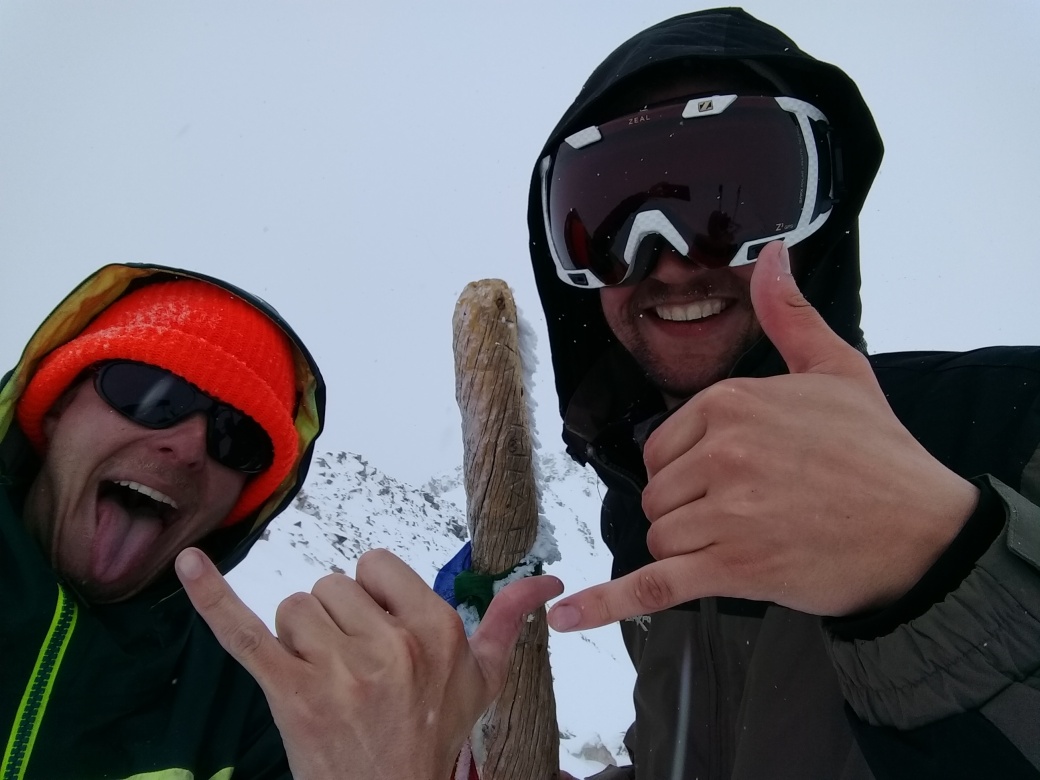 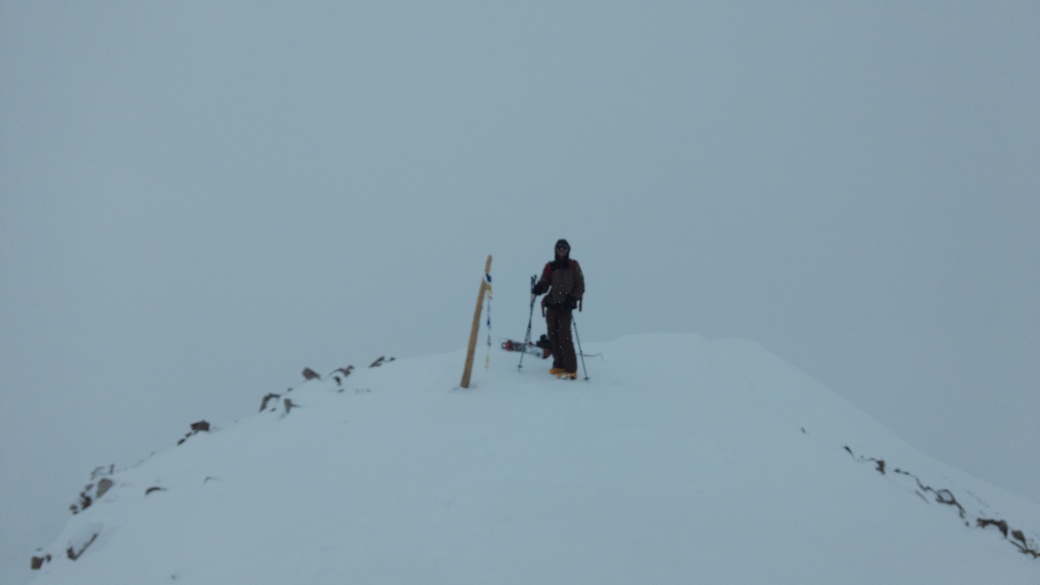 The ski down was fun if not a little dangerous.   In the new foot of powder, the skiing was smooth and buttery until straying onto a previously melted area where the shark-teeth were waiting.

Back at the car Doug expressed great gratitude for my going on the trip.  I felt lucky to have been there, and to see the happiness on his face as he came over the last of the ridge below the summit.  His look was one of a man who has sees home after a seemingly endless struggle.

The thought I wish to relay is gratitude for the opportunity to assist a friend.  I am blessed to have so many friends that enjoy the same things I do.  I am also grateful I can provide guidance for someone less experienced than myself.  To dispel any misgivings about going on a trip with someone faster or more experienced due to fear of slowing them down.  I myself struggle with this.  I find myself feeling scared to accompany more accomplished climbers for the same reason.  This trip made me realize a little more that while a valid feeling it is an irrational one.  I gained some perspective on this trip by listening to my friend express the same fear.

I also found it helpful to look at the mental preparations I made before this trip.  Walking into this trip knowing I would be skiing slower and at a level less that I am capable of,  I knew the pace would be set by Doug.  In this way I would not be offended if our objective was not met.  Rather I could see the truth that being in the mountains with good friends is a euphoric experience.

To end I would like to congratulate Doug on his iron will and determination to overcome the obstacles; and also to thank him for the trust he showed in me by asking me to be a guide of sorts.  Until next time!

This site uses Akismet to reduce spam. Learn how your comment data is processed.